I picked up three of these 9800 GTs at Frys on my way back from Maker Faire for $120 (after tax) each. Notice the connector on the right? It is component output, but I wonder if that can be converted back to composite? If so, we could run three projectors from 1 card.. 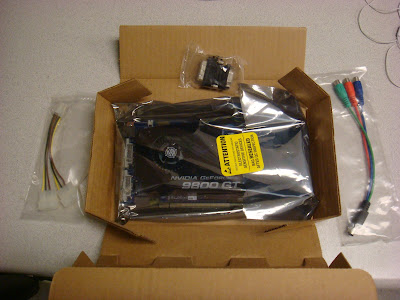 Also, they come with molex to 6-pin power converters, so now *ONLY* the power supply wattage out to be an issue.

I was choosing between these and some 1024MB Geforce 9500 GTs which were about $75 before taxes. The 9800 has way more processing power, but I wasn't sure if the video memory would be a performance issue with a 3D desktop.

There used to be issues with video memory on Nvidia cards and a compositing window manager like Compiz, because each window needed to be backed by video memory. I just checked though, and it looks like it may have been fixed in this driver release, which is a bit older than even the old driver I'm installing on the final table.
Posted by matt at 10:48 PM